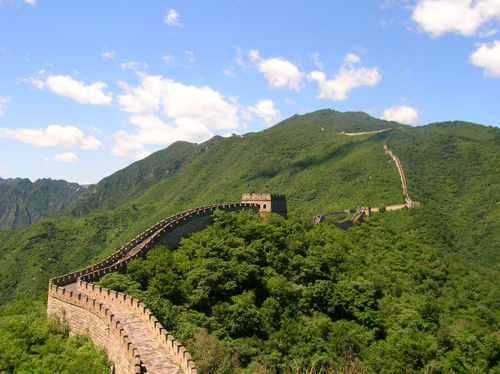 Centuries ago, an extraordinary art was developed in China, which combined the areas of health, martial arts, meditation and philosophy of life in a special way: the WING-CHUN .

The masters have researched, created and improved this system over generations. The WING-CHUN system has long been a well-kept secret of a small number of the top masters who kept this teaching and strictly limited its transmission.

In order to understand this meaning today, background knowledge is required: In a time that was permanently shaped by war and conflict, the study of martial arts meant a vital necessity that had nothing to do with sport. This is how top secret, extremely effective techniques of martial arts developed, which included physical health as well as mental development through meditation – specifically to achieve victory in combat.

After more peaceful times, more modern weapons, but also the constant influence of Western culture in connection with the Chinese Cultural Revolution, valuable martial arts systems were increasingly forgotten or even died out.

Up to the present day, the modification of the martial arts can hardly be stopped: The intensity, the degree of difficulty and the meaning of the exercises are continuously reduced in order to do justice to the fast-moving and often superficial way of life.

Complex, traditional systems that have been developed over generations are being dismembered more and more. The true essence of martial arts can no longer be kept alive, even though many of the old masters in China were among the social elite, since their ideal of education was not limited to martial arts, but also included philosophical, artistic, scientific and medical studies. Advanced martial arts degraded to widespread gymnastic activity. The martial arts aspect with its high demands on physical and psychological performance gradually faded.

A grand master of WING-CHUN, Dr. Leung Jan (1826-1901), who learned the system to perfection, limited the transmission and kept it as far as possible from the public. So it could survive in its authenticity, although it has been forgotten by society. It is difficult to guess why he completely removed exercises or falsified them. This could be due to the fact that the real Chinese masters were reluctant to disclose their knowledge, because they often believed that the importance and value of such an insight were not sufficiently valued.

So the value of many exercises was reserved exclusively for the master. In the end, the students only trained an outer shell, which was basically nothing more than gymnastic exercise, which had a positive effect on the mobility of the body, but had nothing to do with the important and indispensable inner developments. However, such exercises, misunderstood as “sport”, can no longer develop their real format today, because the true martial arts have always striven for the perfection of humans as a central value and not only the ability to successfully decide a fight for themselves. 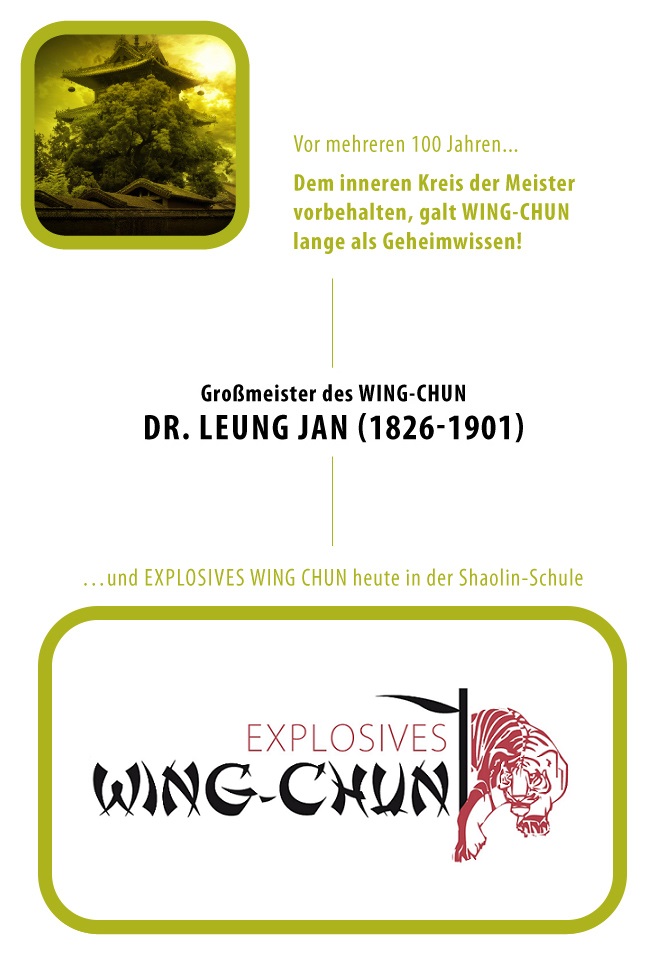 Pillars of the Explosives
Wing Chun

Since Master Dr. This WING-CHUN style was only passed on to Leung Jan to a limited extent. It is completely different from many WING-CHUN styles! The central aspect is the development of inner strength. It is characterized above all by its speed, explosive impact and its high impact frequency. The pillars of the “Explosive WING-CHUN” are composed as follows: 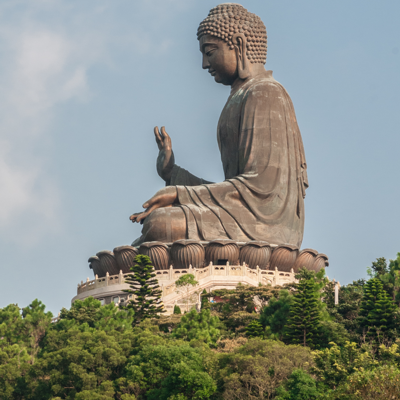 In the ancient Chinese teachings, health and martial arts form an inseparable unit, because only health-conscious behavior that brings the body physiologically and orthopedically close to its ideal standard situation is the prerequisite for its free mobility and responsiveness. “Martial arts” should not be understood to mean a violent club ideology or an exclusive sport from the western point of view. The truly striving aspirant sees rather the “struggle” with himself at the center of his efforts to win over mistakes and thoughtlessness and thereby mature and grow human, ethical and spiritual!

Traditional Chinese medicine (TCM) believes that diseases arise from blockages in the human energy system. However, if we allow the internal energy (Chi), as is taught in the explosive WING-CHUN, to flow freely through the meridians (energy channels), health can be permanently established into old age.

If the interested person is seriously willing to familiarize himself with the theory and practice of this world view, he will increasingly have opportunities for his mental, physical and health development, which in retrospect justify all efforts, patience and persistence.

Much of the recovery process is attributed to the fact that the internal energy (chi) affects the electromagnetic situation of the human body. Because every change in health is reflected in the electrical and biochemical state of the body. Such processes are triggered by electrical impulses that are transmitted via the nervous system and ultimately lead to physiologically predetermined reactions at the target location.

This makes it conceivable that Chi returns the disturbed bodily functions back to the “normal state” by regulating the continuously transmitted signals in the body.